Ad blocker detected: Our website is made possible by displaying online advertisements to our visitors. Please consider supporting us by disabling your ad blocker on our website.
We are raising money for the board to continue in 2020 and beyond. We are run by volunteers and the servers that our systems run on are not free. We hope you'll be able to help.
DONATE TODAY

Take a look at the current and upcoming Winter forecasts or Autumn forecasts and any weather alerts or news.
Post Reply
1 post • Page 1 of 1

She died at Manchester’s Christie’s Hospital after a short illness. Dianne leaves behind a husband and two young children.

Dianne was a colossal. Not only did she work on BBC Radio 1 & 2, before joining BBC North West Tonight in the mid 90’s, but people of a certain age may remember her presenting the kids Saturday morning TV show - The 8:15 From Manchester.

It really is awful news. I’m sure I speak for everyone at UK Weather Watch in offering our deepest and sincerest condolences to Dianne’s Family and Friends. 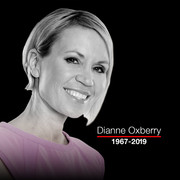